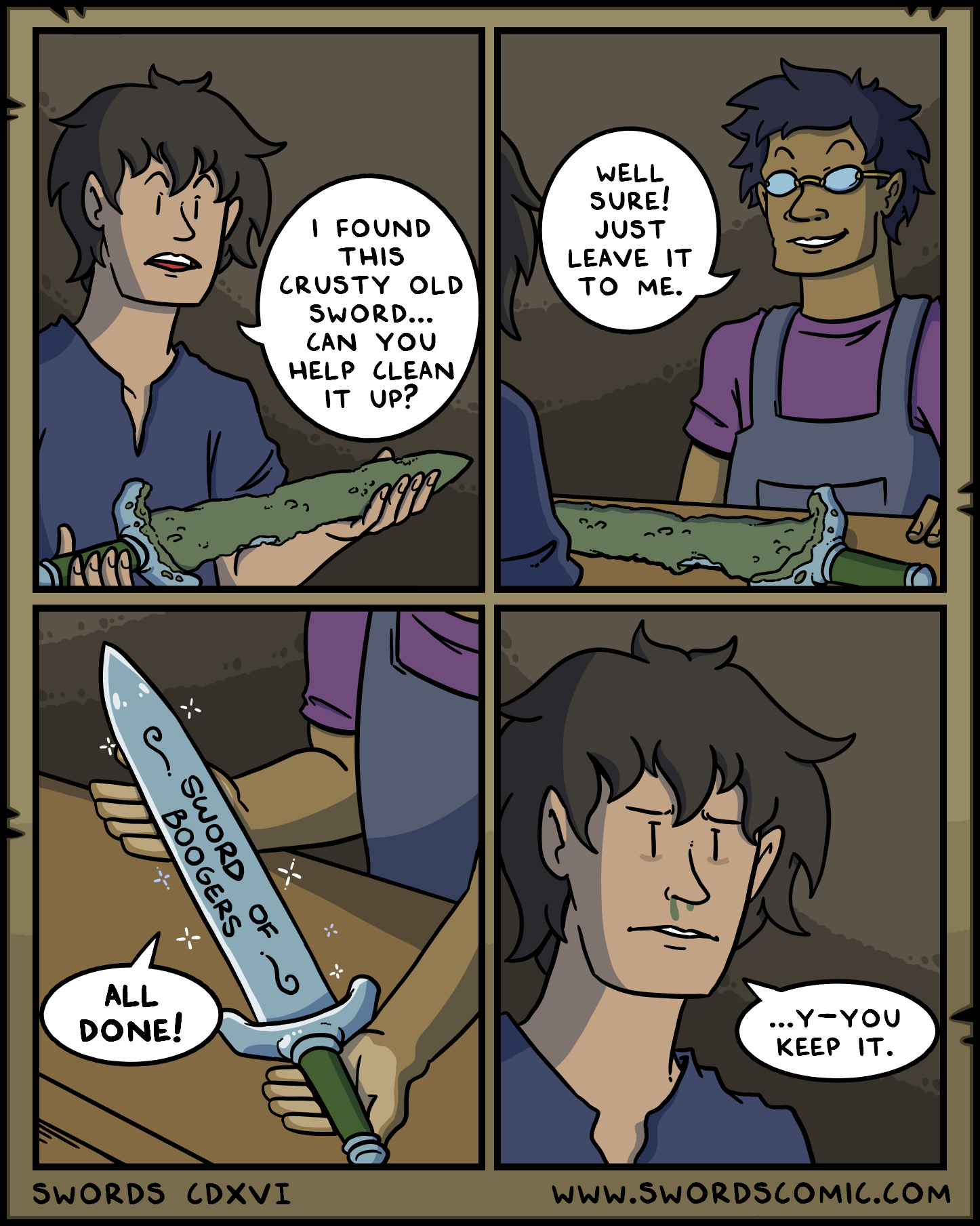 Adventurer: I found this crusty old sword... Can you help clean it up?

Adventurer is holding up a sword covered in a green crust

Blacksmith: Well sure! Just leave it to me.

simon_w
reply
Crabs are, after all, the ultimate form
Wellington, New Zealand

alt_text_bot
reply
Nature abhors a vacuum and also anything that's not a crab.

simon_w
reply
I would read this book.
Wellington, New Zealand

I don't know what to believe any more.
New York, NY

awilchak
reply
I would pay money for this book
Brooklyn, New York

They say that money corrupts you. But I can't really tell.
East Helena, MT

alt_text_at_your_service
reply
I can't help myself; now I want to read a bunch of thinkpieces from newspapers in Biff's 1985 arguing over whether the growth of the region into a corporate dystopia was inevitable.

alt_text_bot
reply
I can't help myself; now I want to read a bunch of thinkpieces from newspapers in Biff's 1985 arguing over whether the growth of the region into a corporate dystopia was inevitable.

Experience is a candle by CommitStrip
Tuesday November 6th, 2018 at 5:44 PM

This is the sort of cramming I can get behind.
Wellington, New Zealand

HHVM 3.26 is released! Highlights include a new frontend, relicensing of the typechecker and related tools and libraries to MIT, and support for Ubuntu 18.04. Packages have been published in the usual places.

The Hack & HHVM team is excited to announce that HackC — the new front-end for HHVM — is now on by default in this release, after about a year of work by many. This includes a full-fidelity parser (FFP) and bytecode emitter for the Hack and PHP languages. The FFP already powered several tools, such as Hack’s IDE integration via the Language Server Protocol, hackfmt, and hhast; in addition to the runtime, we expect the typechecker (hh_client and hh_server) to use the FFP in the future, leading to a single unified parser for typechecking, execution, IDE services, and other tools.

HackC passes all of HHVM’s tests - including the PHP specification tests - and produces semantically equivalent bytecode. That said, if you encounter problems:

You can verify which frontend is being used by inspecting the __COMPILER_FRONTEND__ magic constant.

As previously announced, Hack is now available under the MIT license. 3.26 is the first stable release to include Hack under these terms.

dynamic is a new type we’ve added to Hack’s type system. The dynamic type is a special type in Hack used to help capture dynamism in our codebase in typed code, in a more manageable manner than mixed. With the dynamic type, the presence of dynamism in a function is local to the function, and dynamic behaviors cannot leak into code that doesn’t know about it.

For example, this untyped code will not raise type errors, as the typechecker assumes any use of untyped variables ($x) is valid:

With dynamic, the local usage is allowed, but dynamism must be removed at the function boundaries:

Finally, with mixed, the type must be refined before use: